Welcome to the latest news from our School Councillors who are elected in each year group throughout the school.

The School Council held a popcorn stall at the Christmas Fair at school!

Last Friday, the School Council organised a coffee and cake afternoon for parents of Foundation children in aid of Macmillan Cancer Support. A fantastic £165.45 was raised. Big thanks to everyone who came along and to all those who donated cakes.  Also, many thanks to the School Council and Miss Cooke for organising the event. 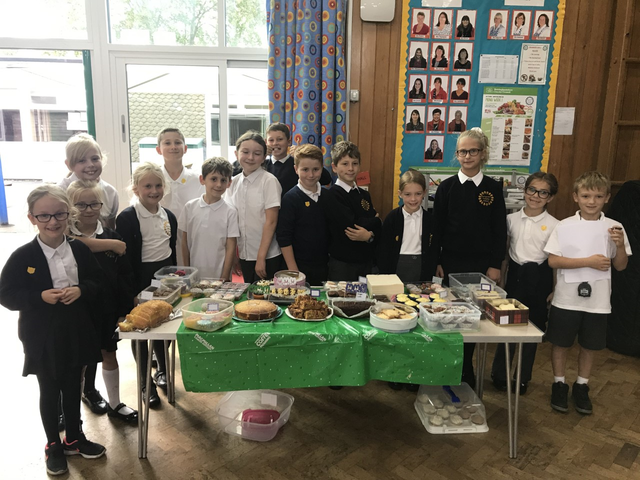 The School Council ran a popcorn stall at our annual Summer Fair! Thank you to everyone who bought some of our popcorn which was made by 3S. A very big thank you for baking cakes and helping us raise money for Red Nose Day last Friday.  We were overwhelmed by the response and the very talented bakers we have in school.  All the cakes and biscuits were entered into the Carnarvon Bake-Off competition and it was a very tough decision for our councillors, but we are pleased to announce the following winners:  Eden from 3D and  Oscar from 1CS.  We also received donations for “wear something red” and are pleased to say in total, we raised a humungous £819.55!!   Our School Councillors are pictured below. 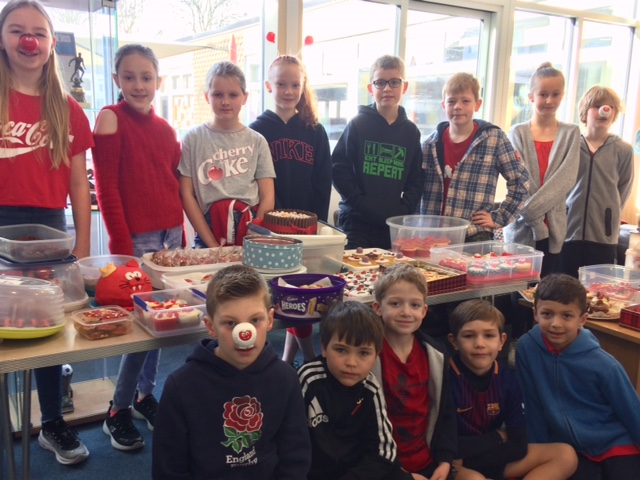 The School Council, Eco Council and 'Fruity Friday' helpers were treated to an exciting morning at the ice rink at East Bridgford Garden Centre. The children had a fantastic time and showed some real talent!

Two of our School Councillors, Bethany and Adam, from Year 6, have been elected as our representatives at the Rushcliffe Learning Alliance's Pupil Parliament. During the first meeting, at County Hall in West Bridgford, each school was invited to share an idea which could be turned into a petition to gain 100,000 signature and be read out in Parliament. After a vote by over thirty schools across the borough, Bethany and Adam's idea to replant a tree when one is chopped down was chosen as the petition idea which the Pupil Parliament will be backing to get to Parliament. Well done to the two of you for your fabulous presentation! 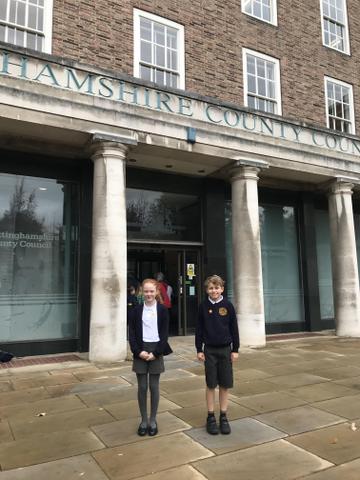 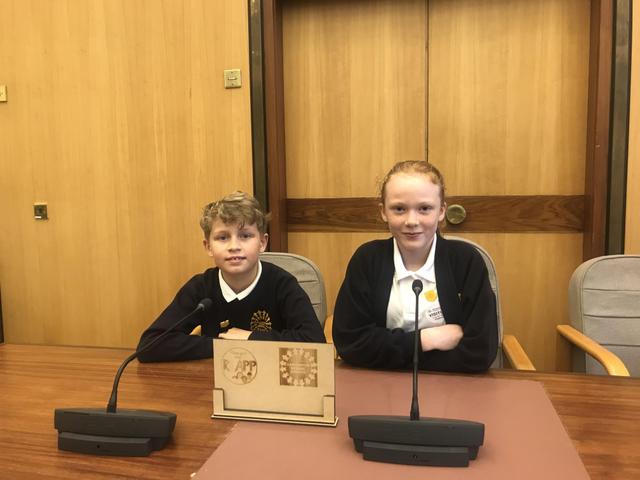 To welcome the families of our children in Foundation to the school, the School Council ran a 'Coffee and Cake Afternoon' to raise money for Macmillan. The event raised a fantastic £108! Thank you to everyone who came and donated cakes. 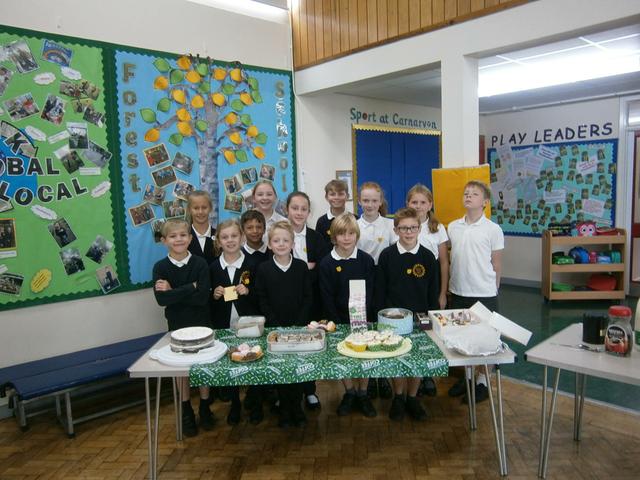 Congratulations to our new School Councillors

They will be working with Miss Cooke to discuss ideas for fundraising and making a positive change around the school.

A further congratulations to Adam and Bethany (6H) for being voted by the School Councillors to represent Carnarvon at the Rushcliffe Learning Alliance's Pupil Parliament. The Pupil Parliament holds meetings three times a year at County Hall in West Bridgford, to discuss issues across the borough and identify how they can improve and support these issues.

All the School Councillors are pictured below: 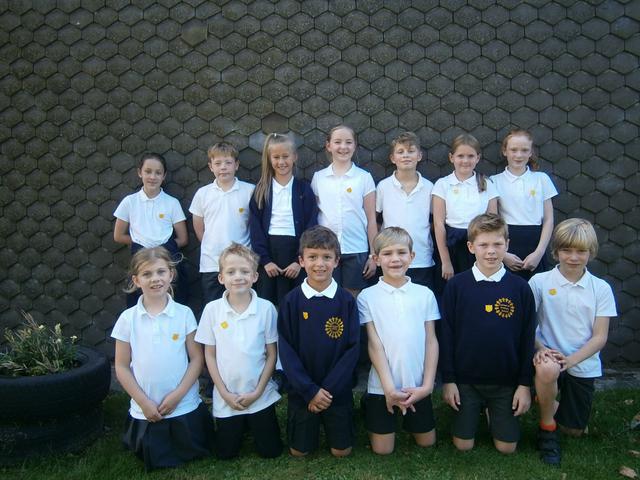 The School Council held their own popcorn stall at the Summer BBQ and took it in turns to sell their goods. It all sold out! 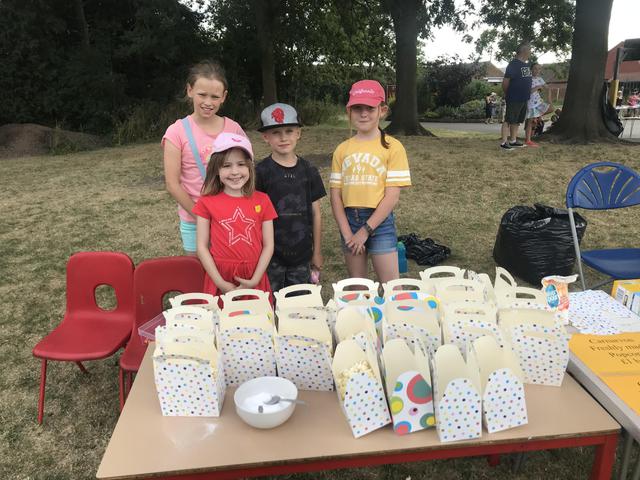 The School Council planned and organised a disco for Years 3, 4 and 5 to raise money for a bench for our lovely dinner lady, Mrs Severn. The theme was 'the last 50 years' as we are celebrating our school's 50th birthday this year!

Toby and Jacob from Year 6 went to County Hall to meet up with the other children from the Rushcliffe Learning Alliance's Pupil Parliament. They discussed the leisure facilities that are available in Rushcliffe and what can be done to improve them. The School Council ran their own popcorn stall at the Christmas Fair this year. The money raised from the fair is going towards a new play area for the KS1 children. Thank you for all of your support! 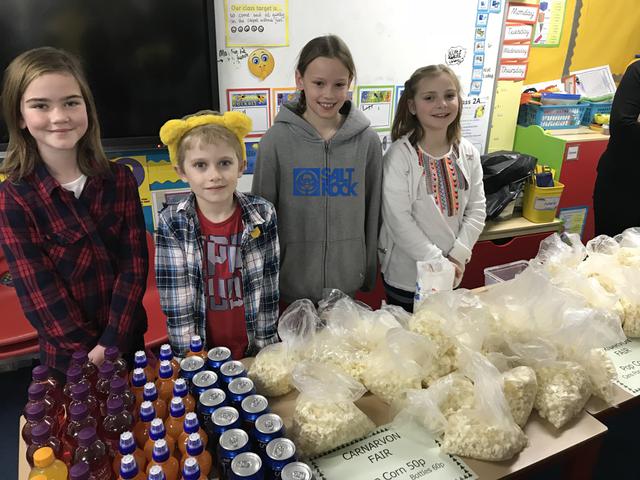 The School Council visited the local cemetery to commemorate Remembrance Day. They were invited by the British Legion and laid crosses on the graves of some World War One soldiers. 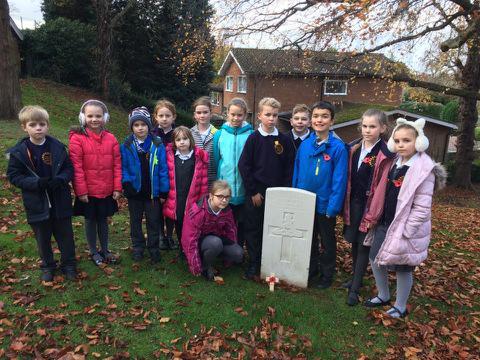 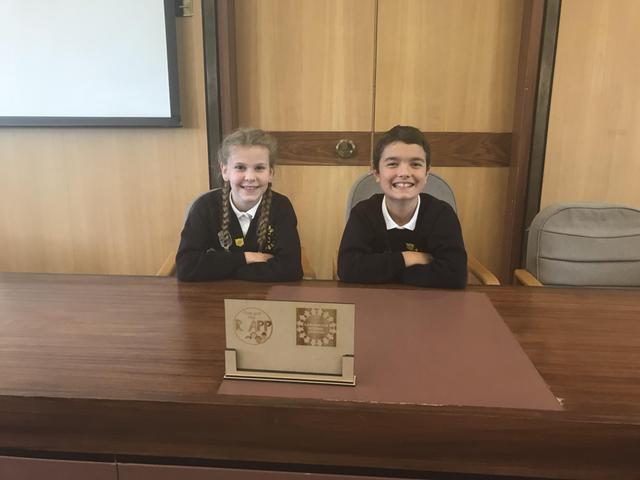 The School Council organised a coffee and cake afternoon for parents of Foundation children in aid of Macmillan Cancer Support. We also held a cake sale after school for all parents. A fantastic £115.50 was raised in total. Big thanks to everyone who came along and also to everyone who donated cakes. Half the money will be sent to Macmillan and the other half is going towards the cost of a bench in memory of Mrs Carol Severn, our late Senior Midday Supervisor, who passed away earlier this year after a battle with cancer. If anyone would like to make a further donation towards the bench, you can do so at the school office. 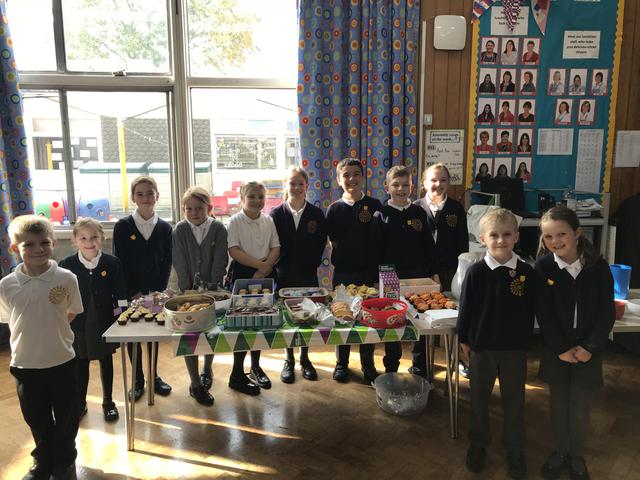 Some children from Years 2-6 visited London. They had a fantastic time looking around the Houses of Parliament, including going into the House of Lords. They learned all about the history of Parliament at Parliament's Education Centre too. After the tour, they met with our MP, Robert Jenrick, who answered lots of questions and took them on to the terrace by the River Thames! In the afternoon, they travelled to the British Museum and looked around the Roman and Pre-historic Britain rooms. The children were a credit to the school - a lady even approached us during the tour of Parliament to say how impressed she was with their behaviour! A fascinating and unique day was had by all.

Spencer and Phoebe in Year 6 had a great time in London visiting the Houses of Parliament. They were accompanied by Miss Cooke and children from 27 other schools from within the Rushcliffe area. The children had the opportunity to look around the Houses of Parliament, take part in a 'debating workshop' at Parliament's Education Centre and also enjoyed a walk to St James' Park. Both children were a credit to Carnarvon and their knowledge about politics was particularly impressive! 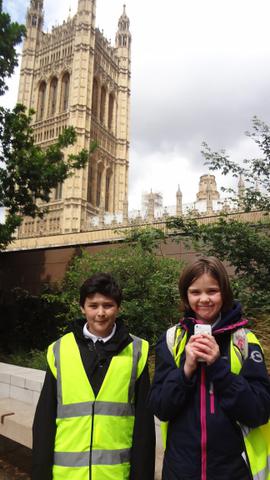 A defibrillator is easy to use.  You telephone 999, they give you an access number to unlock the cabinet and the defibrillator then tells you what simple steps to follow until the emergency services arrive.

Donations towards initial installation or annual maintenance can be made online at: https://communityheartbeat.charitycheckout.co.uk/carnarvon or we have a collection box in the school office.

Many thanks for your support,

For Red Nose Day, we held a 'bake off' with the Eco Council as well as a 'bring a teddy' day. The teddy could also wear something red, which matched what we were wearing. We raised a fantastic £692.30! The cakes which we entered were brilliant! Thank you to everyone for your support! 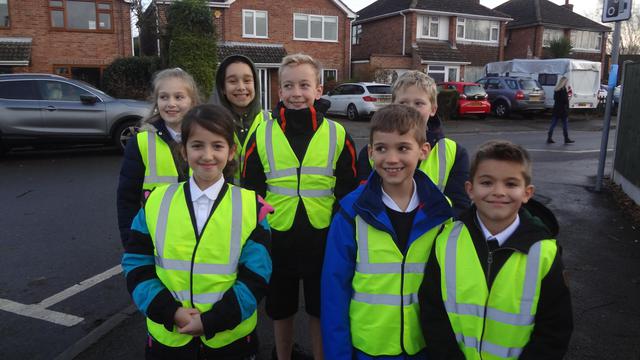 As part of Parliament Week, the School Councillors met up with Councillors from Rushcliffe Borough and also Bingham Town to discuss both roles and share ideas. There were some really interesting conversations taking place and it was fantastic about Bingham and Carnarvon itself. Both the Mayor of Bingham and the Mayor of Rushcliffe joined us so it was great to see their chains and hear about how they get their role. A big thank you to all of the Councillors who joined us: Cllr Purdue-Horan, Cllr Stockwood, Cllr Hull, Cllr Shelton and Cllr Davidson. 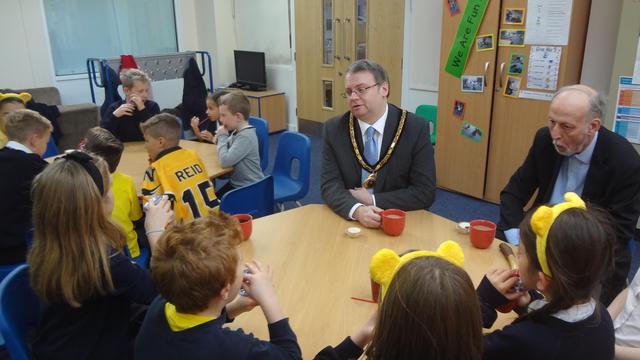 The School Council had a wonderful time during Parliament Week visiting County Hall in West Bridgford, Nottinghamshire. The transport and lunch was kindly provided by Councillor Francis Pudue-Horan. The children had a tour of the building, accompanied by the Chairman of Nottinghamshire, Yvonne Woodhead. They then entered the Council Chambers, where they had the opportunity to ask both Councillor Purdue-Horan and the Chairman lots of questions about their role.

On Tuesday 8th November, the School Council accompanied the British Legion and Robert Miles Junior School to Bingham Cemetery to lay crosses on the graves of soldiers who died in the World Wars. 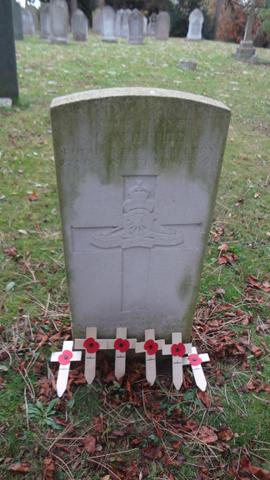 For Harvest this year, the School Council raised money for 'Mary's Meals' which is a charity that raises money to pay for children in deprived areas around the world's school dinner. We held a non-uniform day where we all had to wear an item of blue (the charity's colour). We raised a fantastic £427.35 which pays for 35 children's school dinners for a whole year! 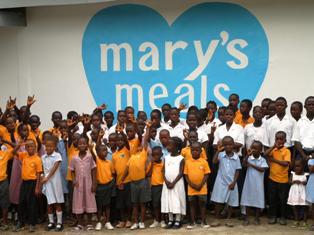 The School Council organised a coffee and cake afternoon for the Foundation children's parents to raise money for Macmillan on Friday 7th October 2016. Thank you to everyone who came to make it a big success... we raised a fantastic £65.96! 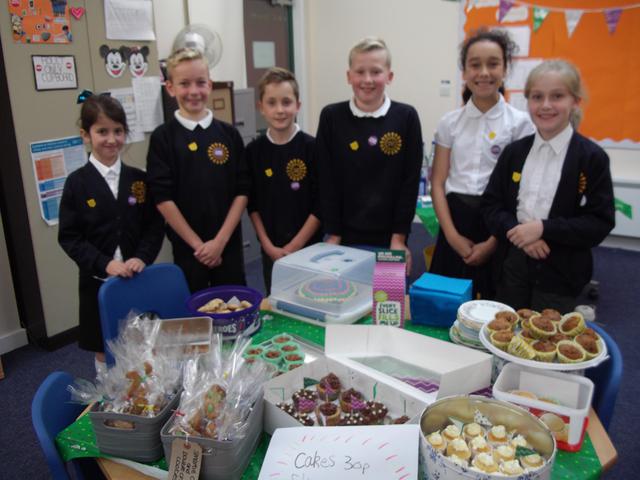 The School Councillors held their own stall selling 'loom band' decorations and bracelets at the School Christmas Fair this year! A big well done to everyone who helped! 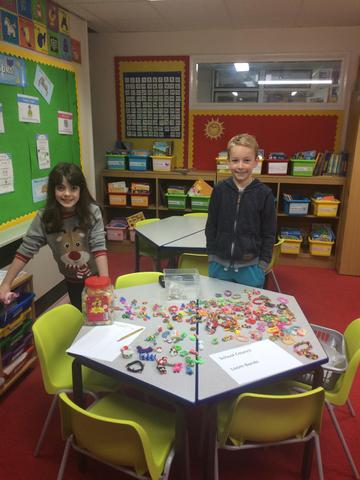 There is an audio magazine called 'The Bingham and District Magazine', which is listened to by a variety of people ranging from blind people through to the elderly and house bound. The School Council were invited to talk on the Christmas edition about traditions that they had in their own homes. The article went down a hit with the listeners! 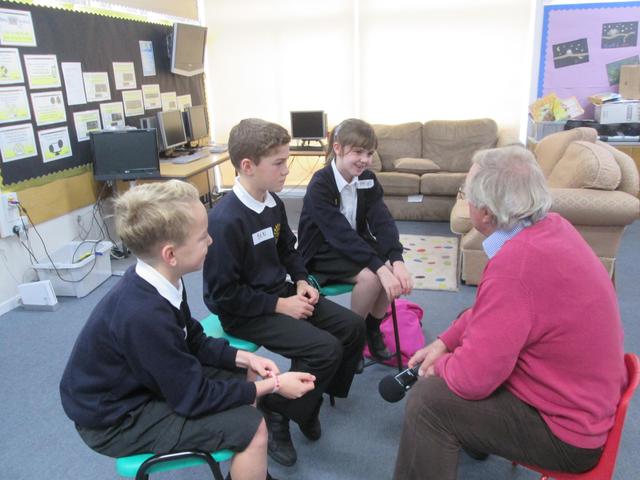 The School Council organised a 'Design a Pudsey' Competition, non-uniform day and a cake sale, where they sold cakes at break time for Children in Need.

It was a fantastic group effort and they raised hundreds of pounds for this brilliant cause! Well done everyone and thank you to everyone who donated money. 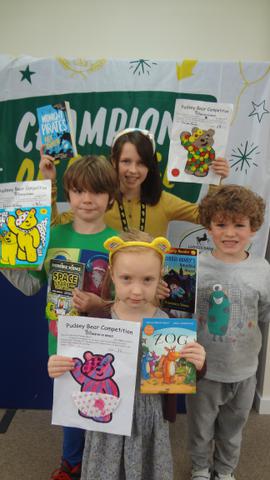 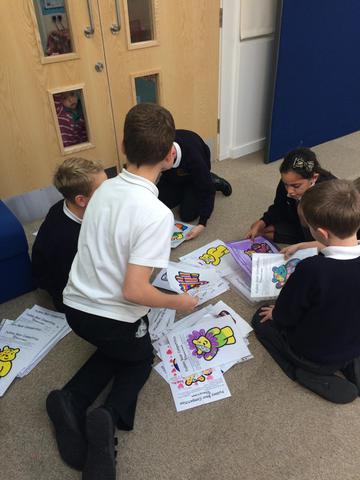 The School Councillors walked up to the local cemetery to lay poppies on the graves of local veterans with the British Legion in Bingham. They learnt about the soldiers: what had happened to them and what war they fought in. 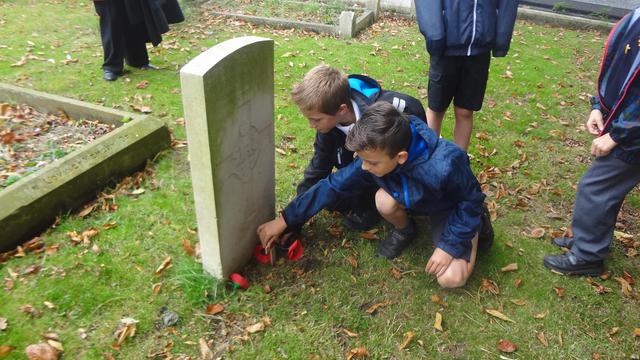 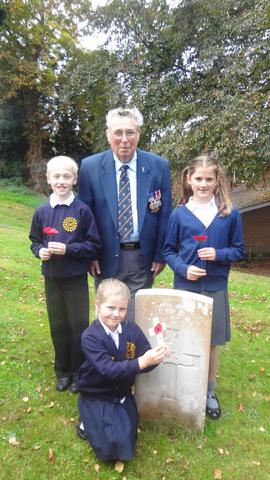 The School Council walked to The Buttercross in Bingham Market Place to attend The British Legion's celebrations to commemorate 70 years since VE Day. The Councillors spoke to veterans who have fought in wars. 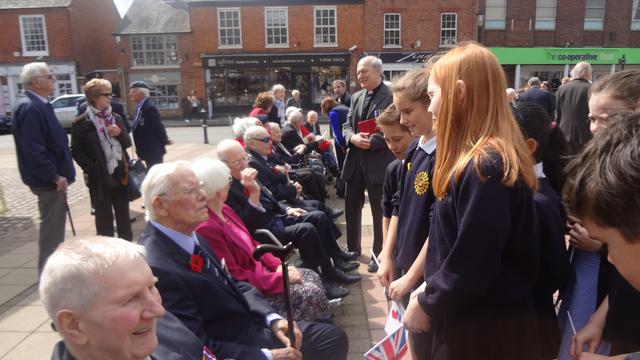 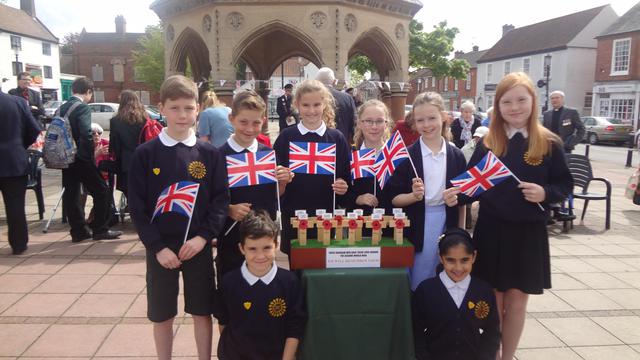 The School Councillors accompanied our local councillor, Martin Suthers, on a trip to County Hall in West Bridgford to meet the Chairman of Nottinghamshire.

They visited the Council Chambers and learnt what it's like to be on a real council! They also signed the visitors' book which the Queen has signed too! 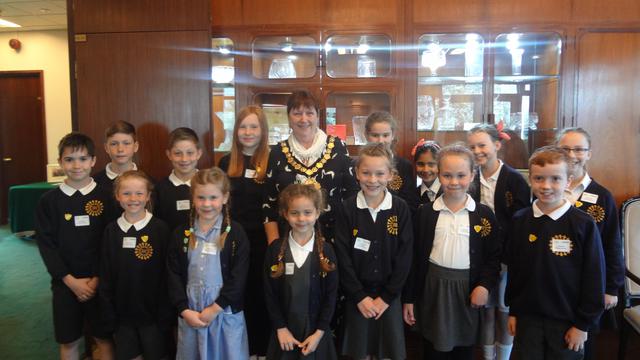 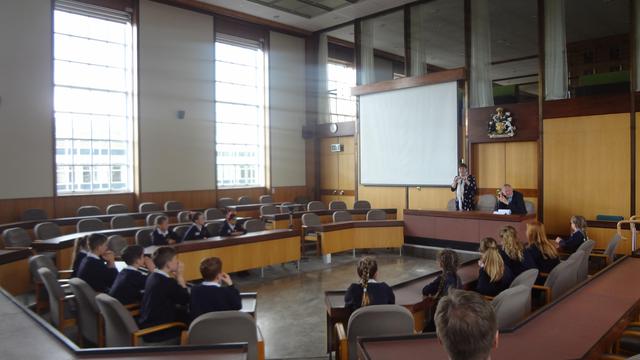 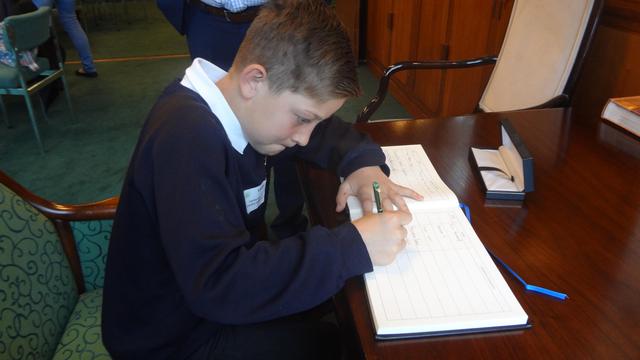